I just saw this in my Facebook feed. Black Sabbath is promoting the fact that their first eight albums are now available on iTunes. They used a Facebook Promoted Post ad to advertise that fact with an image of an old, beat up eight track tape of their Vol. 4 album, presumably targeting younger Boomer and Gen X men.  Note at the bottom of the following screenshot, captured five minutes after the post went live, that there were already 562 Likes, 53 Shares, and 24 Comments. 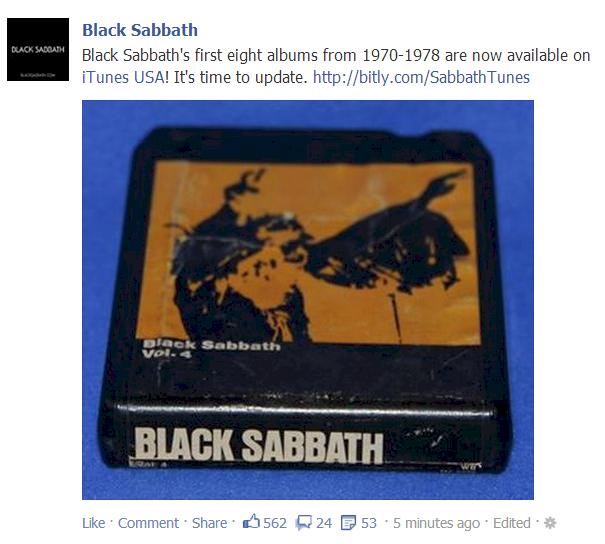 A mere hour or so later, the post on Black Sabbath’s Facebook page boasted 3,971 Likes, 484 Shares, and 194 Comments. Keep in mind that the band has the luxury of critical mass, with a Facebook audience of 9.9 million fans but nevertheless, the use of the photo of an eight track tape was smart. As you can see, the image obviously spurred a nostalgic reaction with fans sharing memories and even posting photos of their own eight track and cassette tapes.

If you’re a Sabbath fan, it would’ve been cruel of me not to post the actual Vol. 4 album after dwelling on it for this entire post. 😉