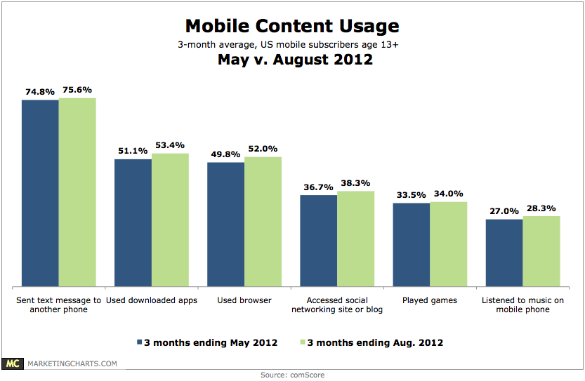 Listening to music is becoming a more popular activity on mobile phones, finds comScore in its latest Mobilens data release, and this has important ramifications for the music industry. During the 3-month average ending in August, comScore reports that almost 3 in 10 mobile phone owners listened to music on their devices, up about 5% from the previous 3-month period. While that’s not a huge jump, it’s the continuation of a gradual trend that has seen a more than one-third increase in the mobile audience listening to music since the same period last year. This increase is having an effect on music sales. As Nielsen points out in an October blog post, the proliferation of mobile devices – and their presence in everyday life – has been a key contributor to growth in digital music, with digital album sales increasing 15% year-over-year through August, on pace to surpass last year’s peak of 1.3 billion digital track sales. That’s good news for the industry, given an expected 9% decrease in physical music sales this year. Read the rest at MarketingCharts.