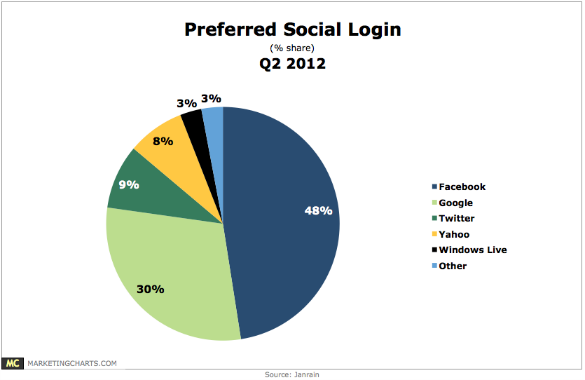 Facebook leads other social logins across such industry verticals as media, retail, entertainment and gaming, and music-related sites. Its popularity is especially pronounced on music sites, with two-thirds share of social login, versus second-place Google at 14% and Twitter at 12%.

Facebook (48%) was the leading option in Q2 2012 for social logins among online users who opted to use a social network identity to speed up registration on sites across the web, according to July 2012 data from Janrain. Another 30% preferred to use their Google accounts for login, followed by Twitter (9%), Yahoo (8%), WindowsLive (3%) and others (including LinkedIn and Pinterest) at 3%. Facebook continues to enjoy a upward trend that dates back 8 consecutive quarters to 23% share in Q1 2010, most recently up 3% points from 45% in Q1 2012. Read the rest at MarketingCharts.